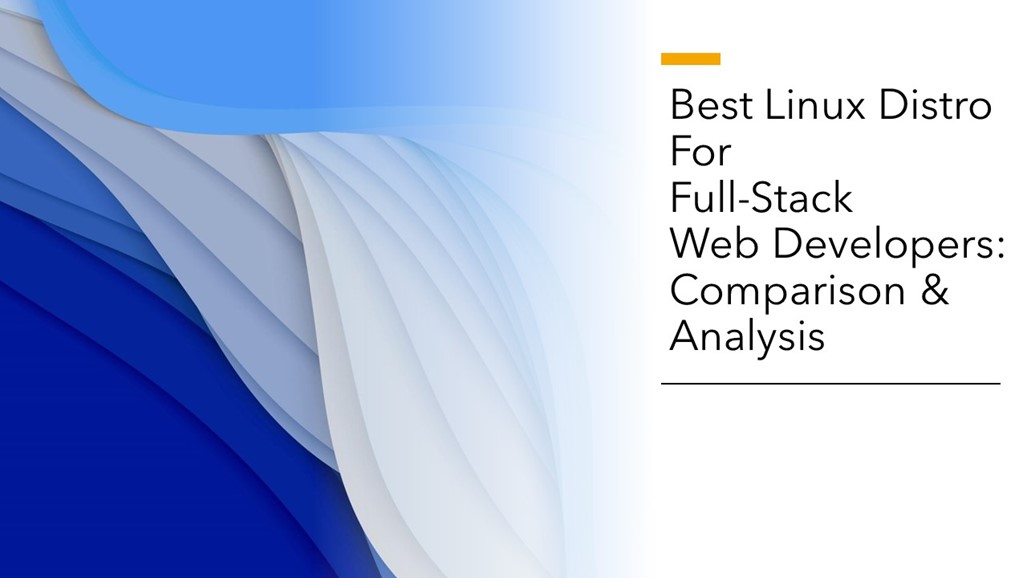 This article is for those of you who are Linux-users/Distro-hoppers who are trying to find the perfect distro to do Full-Stack web development in. Let’ go ahead and explore what choice we have and analyze their differences in an attempt to choose the best Linux Distro for Full-Stack Development activities.

Let’s start by look at the short version of the answer for those of you in a hurry to start your development activities!

That is just the short version of the answer, let’s go ahead and look at the longer and more informative version and learn what were the factors considered, what other choices you have and see why Ubuntu is chosen as the best distro for Full-Stack developers along with some valuable resources for getting started with your development quests!

Linux has already captured a huge percentage of the server market and it is the most dominant player there. As almost all the web is being run by Linux, it is a good idea to do your development natively on a Linux machine!

As Linux is getting more and more famous lots of distros are being developed to enhance the desktop support for Linux. The setup programmers would need for coding will be radically different than the setup artists and video editors would need for content creation and editing! Hence some factors that are considered important for using Linux as a workstation depends upon the kind of work that you are planning to do with your machine.

If you are going to be doing lot of your development activities in Python then I suggest reading this other article I wrote on that topic!

In this article, we will be focussing specifically on the needs of Full-Stack developers who use JavaScript frameworks like Angular, Node.js and React for their Full-Stack development activities. Let’s see what those needs are in the next section.

The Needs of a Full-Stack Developer

The basic needs of a Full-Stack programmer include the following.

The above needs can be fulfilled by all the Linux distros as Linux is a major operating system, as such Linux has all the capabilities needed to develop and run your code! All you need to do is to ensure you have the necessary versions of Frameworks of your choice installed in your distro. One distro is not going to be better than another in terms of how good it executes any given code as these distros are going to be using the same Linux OS underneath anyways.

Official Support for the Latest frameworks

But then we are interested in professional development, and hence we need the latest frameworks version available as soon as it is released so that we can test out our code with these latest versions. Usually, the official repo’s of most recent distributions will be behind the latest frameworks releases, but we can always download and install the latest versions straight from the framework’s official website! So, this is another need that is not a decision-making factor for us while choosing a distro!

If your Full-Stack app is supposed to be run from a server or a cloud, then since most of the servers are running RHEL, it makes sense that you use Fedora do develop your app. As a bonus, you get to work with some experimental features months and sometimes even years before you get them in Debian based distros like Ubuntu!

What about Arch and Gentoo?

Arch, Gentoo, and its derivatives are all about catering to the needs of advanced users who can tinker their way through problems. Hence the IDE companies do not invest much of their resources in testing their app in the Arch Ecosystem as the Arch users are proficient enough to solve any problems they might come across.

We’re passionate about inventing embedded devices and we hope you are too! This blog deals with a wide variety of topics from C programming to IOT to networking certifications and more. Hope you enjoy your time spent here and hope you get some value out of our blog!