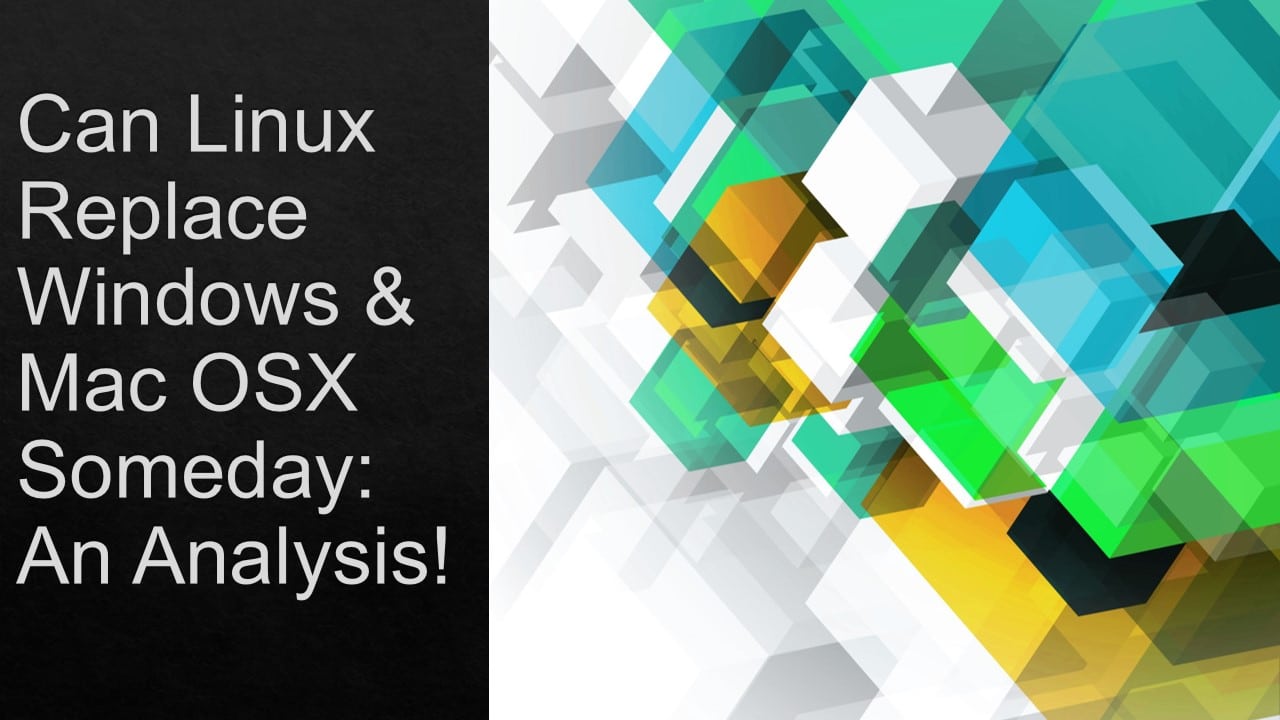 This is a question that comes up with many Linux enthusiasts all the time as they believe that Linux is THE BEST Operating system out there! Let’s analyze the possibility and figure out what will it take for Linux to become a dominant player in the personal computer market!

Contents
1 History of Linux
1.1 Before the Beginning of the Linux Era
1.2 The Spirit Behind Linux
2 Needs of a typical computer user
2.1 Reliability:
2.2 Simplicity
2.3 Tech-Support
2.4 Affordability:
3 Why People Who Try Out Linux Don’t Always Stick to it?
3.1 The Sheer Number of Linux Distros
3.2 Linux education and “Fear of Command Line”
3.3 Lack of software
4 What will it take for Linux to become the dominant player
4.1 The Right Business Model
5 Conclusion
6 Related Articles

Before we can start predicting the future we first need to look at the history of Linux and understand the spirit behind it.

Also, there were other software at that time, which did not even give them access at the source code, as it was distributed as plain installable binaries (as most paid software is distributed today)

Hence Linux can be considered as the operating system produced to fulfill the need of software engineers for software independence!

But what about typical users of computers? What are their needs? Let’s see that in the next section!

Needs of a typical computer user

A typical computer user these days only care about these three ideas: Reliability, Simplicity, Affordability, and Tech-support!

The operating system should give the user a sense of reliability so that they feel safe that it will not crash in the middle of very important business activity. Some distros of Linux like the ones based on Debian (Ubuntu, Linux Mint, etc) are considered reliable but if you ask a typical non-techy computer user the question “Which Linux Distro do you consider reliable?” they will probably answer with another question “What is a Linux distro!”. Hence Linux distro world, in particular, hasn’t yet got the reputation of being reliable!

If you wish to install Linux on your workstation I suggest having a look at my other article given below where I have looked at the main factors that we should consider while choosing a Linux distro for use in a workstation and compared some distros to see how good a match they are to our requirements!!

The OS should be simple enough to use and there should not be any steep learning curves. This means the transition from windows or mac must be an easy one. This criterion has been under consideration of the Linux community and I believe we have already covered a lot of ground here with KDE Desktop environment for Ex-Windows users and GNOME3 for Ex-Mac users!!

If you are hearing the term “Desktop environment” for the first time then go ahead and have a look at my other article on that topic mentioned below.

This is the major need for consumers because not everyone likes to learn about all the products they use. Everyone has their own priorities and some just want to use a product without acquiring any knowledge to learn about an entire industry!

It should not cost a fortune, of course Linux being free fulfills this criteria in the best possible manner! Go Linux!

Out of the 4 above needs, I believe Linux only manages to fulfill 2, which is a major reason of why Linux has not started dominating the personal computer space!

Why People Who Try Out Linux Don’t Always Stick to it?

Needs aside, what are the other factors that are holding back Linux? Why some people try it out and bounce back to their old operating system and why only a small fraction of these people will make a proper move to Linux as their main OS?

Let’s have a look at some of the reasons for this behavior!

The Sheer Number of Linux Distros

Every beginner who enters the Linux world can’t help but wonder, why there are so many Distros out there and the vast number of choices for everything in Linux. Choices can be a bad thing sometimes as it slows the decision-making process which will hinder productivity!

Computers are meant to help people be productive as the “fun” duties have been replaced by their cousins the smartphones and tablets! Having to deal with choices all the time can be bad for some people who expect simple standards to follow for the not-so-important things!

This is another reason people fail to stick to Linux. They get stuck with some simple issues and they go online to find a solution and they are asked to write some commands into the terminal with sudo privileges, which means they are typing something which they have no idea about and giving out their passwords in the process! This makes them jump back to their old and familiar OS where they feel safer and more at ease!

This can only be rectified through proper Linux education, which not everyone is interested in. The next possible solution for this issue is to avoid the command line altogether for simple tasks and replace them with good GUIs. Linux mint and other similar distros are moving in this direction which is good to see!

There is no point in denying that Linux lags behind Windows and Mac in terms of software support. A brand new Linux user already has his/her plate full getting accustomed to the new OS, then they realize that their favorite app is not available for use in Linux and they need to learn this other app which has does not have a great GUI. The only other option is to use the command line to accomplish their task at hand. These situations overwhelm normal users and they quickly bounce back!

WINE, STEAM and other projects have made good strides to tackle this problem recently and let’s hope they continue to get better in the future! But the only real solution to the problem will come after Linux has captured enough market share and app developers are forced to have a serious look at porting their apps to the Linux OS!

Also the spirit of the Linux community and their love for open source software is another reason app-developers are discouraged to port their to Linux. Let’s hope this changes in the future!

What will it take for Linux to become the dominant player

Linux needs to find good partners in the PC industry who can give a push to Linux in the PC arena the same way google pushed android into the smartphone industry. All the non-opensource mobile operating systems like windows phone, blackberry OS, etc,. did not stand a chance in the smartphone market against android which is based on Linux.

The reason behind the success of Android is the business model google took. Google gave all the manufacturers the operating system for free but pushed its Google search through android. Other ways Google makes money with android include is through their play store where google makes a cut for all the purchases people make there. This kind of profitable business model led android to the success that we see today.

If a big company can take Linux through the same path, then it is sure to succeed! All it takes is some Right Marketing and Promoting app developers to make GUI apps that can compete with their windows counterparts.

One company that can make a distro that does everything mentioned above right, that is what it will take for Linux to become the dominant market player in the PC arena!!

The short answer is yes, Linux can become a dominant player, but the problem lies with the spirit behind this operating system which encourages choice, loves open source code, does not go after money and is attractive for technical people as compared to a typical user and I hope this spirit never changes as I personally believe there is nothing wrong with it!

The only way Linux can become a dominant player by having a profitable organization pushing this operating system in the desktop and laptop markets and making a lot of money from it, which I believe is bound to happen at some point in the future. Perhaps one company will come to the market and will make changes to their approach Linux is supposed to be and perhaps the Linux community behind it will encourage it rather than criticizing it and hurts its growth!

Let’s try and preserve the pure spirit behind Linux at the same time go ahead and make the desktop market a better place by encouraging our non-technical peers to use Linux as their main operating system!