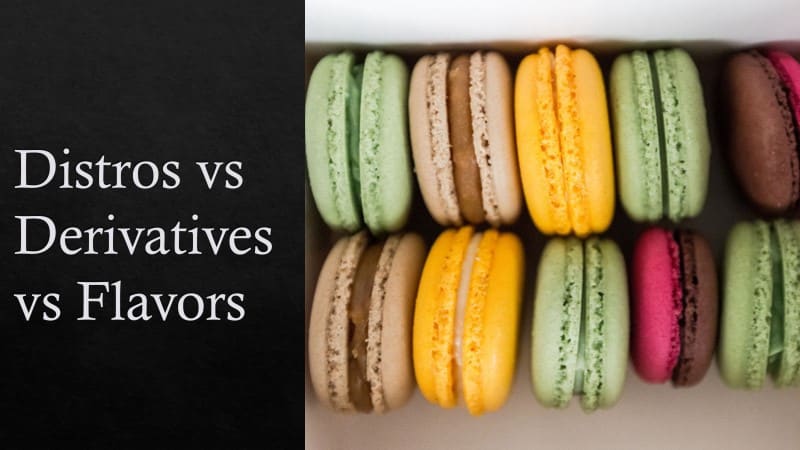 During their journey in exploring the Linux universe every Linux beginner will come across to these 3 very similar terms, Distro, Flavors, and Derivatives. In this article, I have presented the differences between these 3 terms in a beginner-friendly format along with the prior knowledge every beginner needs to have to understand them.

Contents
1 The differences at a glance
2 The Various Parts of Any Given Linux Distribution
2.1 2 Types of packages
2.2 Repositories
3 Distros
4 Original Distros vs Derivatives vs Flavours
5 A Little Side note
6 Related Articles

Let’s have a brief look at the differences.

The differences at a glance

If you can’t understand the table above then read on as before we can understand the differences between these 3 terms, first we must understand what every Linux distro is made of. Let’s go ahead and see that!

The Various Parts of Any Given Linux Distribution

A Linux distro is basically made up of 2 parts

These packages can be application software like text editors, word processors, etc. or they can be the GNU utilities like bash, cron, dd, etc., or they can also be device drivers to talk to the hardware.

In the Linux world, there is an alternative to everything you can think of, be it the desktop environment, the package managers, init system, bootloaders, applications like browsers, text editors and word processors. Some of these packages can be easily replaced.

But some of the other packages that come with a distro cannot be changed, or not at least without headaches. For example, if you don’t like systemd (the latest initialization system), then you can’t just uninstall it and install upstart or init (older initialization systems). You can do that, but unless you are an expert and you know exactly what you are doing, you can end up with a broken OS.

Thus based on ease of replacement, these software packages can be further divided into 2 major types.

Each Linux distro comes with its own set of these “not to easy to replace” packages. That’s what makes each one unique. Some examples of these include the init system and the package management system. One of the important facts that make each distro unique is this set of these core packages which are selected, configured, compiled and distributed to you as a part of the Distro.

In short, core-packages are not so easy to replace.

These are considered to be easily replaceable by a typical user. Examples include application software like browsers, text editors, office suites, etc. These apps can usually be installed in any distro as long as it’s available in the required format.

So a Linux Distro can be thought of as a combination of the Linux kernel, Core packages, and non-core packages, all combined together to make an operating system distributable over the internet.

These packages can usually be installed and updated from software repositories maintained by the distributor of the particular Linux OS. The source code of various Linux packages are compiled to work with a particular distro and stored in a distributable package in these

If you are interested to learn more about packages, package managers and repositories I suggest you read this other article A Beginners Introduction To Linux Package managers: apt, yum, dpkg & rpm. There I have explained

Alright the background information part is over, let’s get back to the focus of this article which is the difference between flavors, Distros, and derivatives

Original Distros vs Derivatives vs Flavours

Now that you have understood what Linux Distros are, let’s go and look at 2 main types of distros

Making a Linux distro from zero involves a lot of work to put all the packages and the Linux kernel together into a single “distributable” Operating system.

Original distributions are those that are made this way from zero. In other words, these original ones take the kernel, GNU utilities, application software, etc. and combine them into an installable operating system and distribute them to the end-users usually over the internet. Popular examples of original distros include Debian, RedHat, Slackware, etc.

Derived distros are ones that take one of these original distributions, make some changes to it, so that its more suitable for a specific purpose and then distribute them as an installable operating system.

For example, Debian is an original distro and all the distros derived from it like Ubuntu, Mint, Knoppix, etc are derived Distros.

Derived Distros have different goals as compared to their originals. They usually depend on the original Distros to some extent (for the parts that have not been changed), but they tend to take on their own routes when it comes to future developments, to make it suitable for the purpose it was created for.

You can have a look at the entire family tree of Linux over at distrowatch.com in this link

Flavors, on the other hand, share the same goals of the original and usually are simple changes made to the Original Distro to accommodate the wishes of a certain division of users.

For example, some people dislike the Unity desktop environment of Ubuntu, but they are happy with everything else the distro has to offer. So for making these users happy several flavors of Ubuntu came out like Xubuntu which uses Xfce desktop, Kubuntu which uses KDE desktop, etc.

Other than the desktop environment, all of these Distros share the same core packages, same init system, same package management system, same goals as Ubuntu and they all use the same repositories to download and install software.

Let’s have a look at our table again.

I hope this time you can understand the table better!

A Little Side note

Some of you may be confused and probably wondering

“is Ubuntu is a derivative or an original ?.

But I was using these Distros as an example just to make a point so that you can see the differences between these 3 terms better!