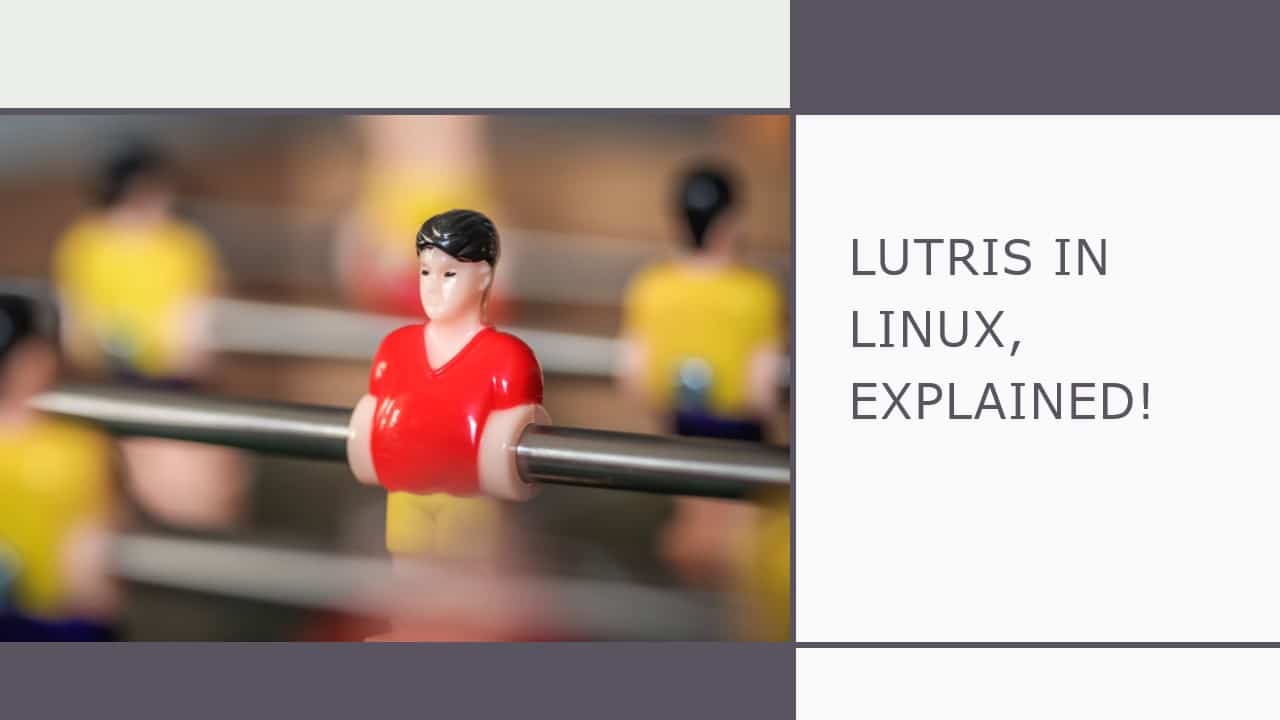 Lutris is a software that makes gaming on Linux a pleasure! In this article let us learn about what Lutris is, what does it do, how it works, and what we can do with Lutris to make our Linux gaming experience better!

Before we can understand the need for Lutris, we must first explore the type of games that can be installed on a Linux Machine.

Types of games that can be installed on Linux

Depending on the sources from where you get your games, Linux games can be classified into the following types.

Coming back to the Need for Lutris

Before Lutris came into the picture, the management of games on Linux was not a very pleasant experience. For example, if you need to play Steam games, then you need to open the steam app, similarly, for GOG games you would need the GOG app, etc.

Especially the configuration and setting up of WINE games was a Herculean task for beginners to the Linux Gaming world. For those of you who do not understand what WINE is let us take a quick detour and learn about WINE.

If you are a windows user, moving to Linux can be hard since you will not be able to use your favorite Windows apps any longer. Even though there are equivalent apps in the Linux world, users tend to get back to Windows. This is usually due to one of the following 2 reasons

The Linux developers noticed this trend of users jumping back to their old OSes and not giving Linux more time to get used to and wanted to do something about it. Hence they came up with something called WINE which will help you run your favorite Windows apps on Linux.

How WINE works: An Analogy!

WINE stands for Wine Is Not an Emulator. WINE creates a virtual environment for the windows app to run in so that these windows apps actually think they are running on a Windows machine. In the background WINE is translating all of their Operating System communication from the language understood by the Windows Operating System to the language that is understood by the Linux Operating System. By “language” here I don’t mean computer languages like C or Java, but rather the API specifications and system calls.

For example consider this simple analogy. Say an app wants to use the WiFi hardware functionality. To use WiFi in the Windows scenario let’s assume that the apps need to say

“Windows, please give me permission to use WiFi”

“Linux, Can I use WiFi please!”

I hope you can see that the 2 phrases have the same meaning even though they use a slightly different language!

For games that run on top of WINE, you need to manually configure the settings to get optimal performance on your games. And this configuration varies wildly between games. So before you can start playing a WINE game on Linux you need to

You can do all this if someone has already made a Windows games work on Linux and managed to share the settings in some corner of the internet!

As you can see this process is cumbersome and will certainly drive away the novice!

Hence Lutris was made to fulfill the need to make the setup and management process of Games on Linux an easier process!

Lutris is an open-source software that can be used to manage and configure games on Linux machines.

Lutris is a gaming client for Linux. It gives you access to all your video games with the exception of the current console generation. You can, in a single interface, run any game from your childhood memories to the current multiplayer games. Integrations with stores like GOG and Steam allow you to import your existing game library and community maintained install scripts give you a completely automated setup.

In other words, Lutris gives us a unified graphical application, from which you can launch all your games installed on your Linux machine. Be it a Steam Game, GOG, Native Linux Games, and even browser games!

Lutris runs your games by using a special software called a “runner” custom made for your specific game.

What is a runner?

A “runner” is a program that provides the environment for our games to run in Lutris.

A “runner” is the term we use to refer to programs that can run games, it can be Linux itself, Wine, DOSBox, MAME, gzdoom, … Runners are recognized as such in Lutris itself, not all programs that run games are considered runners. For example Darkplaces, the open source engine for Quake, is not a runner but gzdoom is. Usually, programs become runners if they can run a variety of games, not just one or two.

The options for runners are not just limited to WINE versions, you can see the latest list of available runners at this link

While WINE is for Windows games, some of these other runners are for other gaming platforms.

How to use the configuration options on Lutrix?

If you are a tinkerer you will be more than satisfied with all the available configuration options in Lutrix. This is especially true when it comes to the huge list of custom WINE configurations that you get to choose from which will work best with your particular game!

Most games should just work, if your game doesn’t then Lutris provides you with options for changing some options like changing the WINE version, using some other compatibility-layer, etc, to make your game run fine. All you need to do is some online research to find the best settings for your game. Perhaps someone else have already figured it out and shared the confs online!

I recommend watching this video on YouTube by Chris Titus where he explains in good detail on how to use Lutris for Gaming on Linux!