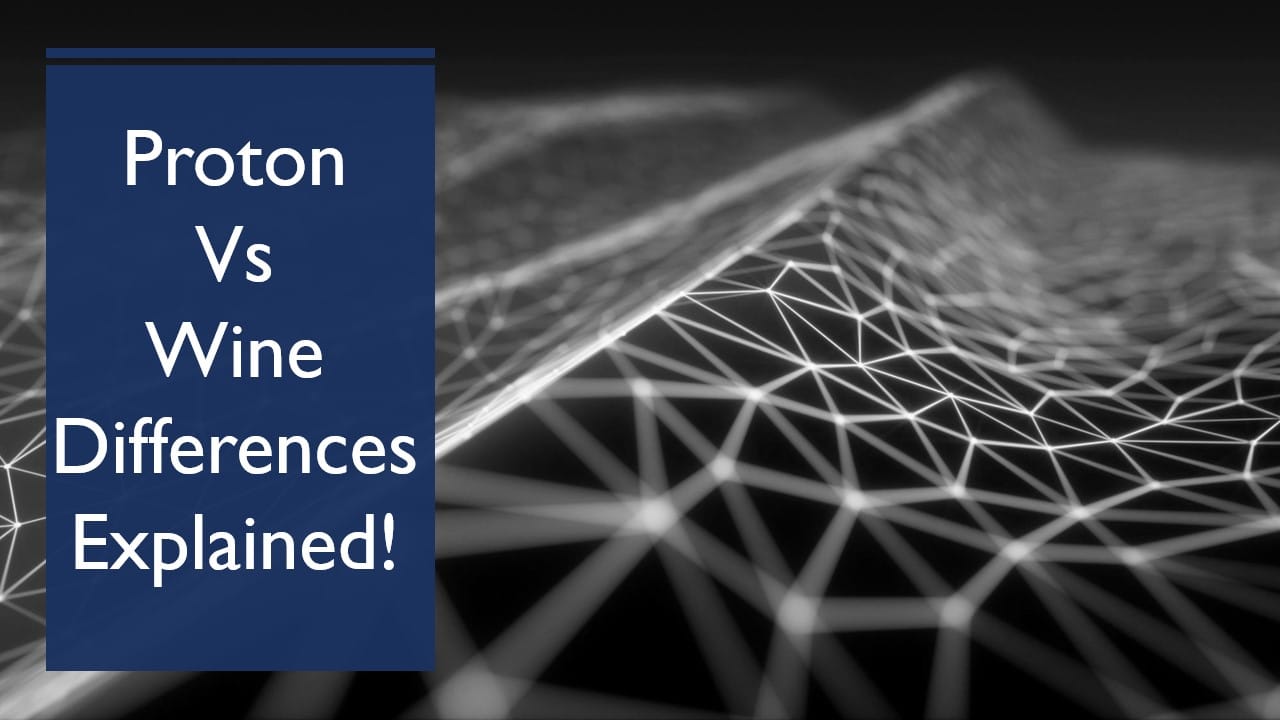 If you have just started researching about gaming on Linux then you will come across 2 terms repetitively namely Wine and Proton. You will also find that some places on the web have people defining Proton as simply Wine plus some other software and some others refer to Proton as the new Wine. Elsewhere you can find people saying Wine is better than Proton and you should always go for Wine for dealing with some specific tasks.

In this article let’s try and understand what Wine and Proton are, the relationship between Proton and Wine and their similarities and differences better so that you can understand the purpose of each one and choose the correct tool for a given task. For those of you in a hurry, here is the short version of the answer!

The differences can be summarized using the table below.

That is just the short version of the answer, let’s go ahead and look at the longer and more informative version and learn about the stories behind Wine and Proton and so that you can understand which one to choose for the given purpose.

Before we begin to see the differences let’s first try and understand what Wine really is from a beginner’s perspective.

If you are a windows user, moving to Linux can be hard since you will not be able to use your favorite Windows apps any longer. Even though there are equivalent apps in the Linux world, users tend to get back to Windows. This is usually due to one of the following 2 reasons

The Linux developers noticed this trend of users jumping back to their old OSes and not giving Linux more time to get used to and wanted to do something about it. Hence they came up with something called WINE which will help you run your favorite Windows apps on Linux.

How WINE works: An Analogy!

WINE stands for Wine Is Not an Emulator. WINE creates a virtual environment for the windows app to run in so that these windows apps actually think they are running on a Windows machine. In the background WINE is translating all of their Operating System communication from the language understood by the Windows Operating System to the language that is understood by the Linux Operating System. By “language” here I don’t mean computer languages like C or Java, but rather the API specifications and system calls.

For example consider this simple analogy. Say an app wants to use the WiFi hardware functionality. To use WiFi in the Windows scenario let’s assume that the apps need to say

“Windows, please give me permission to use WiFi”

“Linux, Can I use WiFi please!”

I hope you can see that the 2 phrases have the same meaning even though they use a slightly different language!

Let’s next try and understand what is proton from a beginner’s perspective.

What is Steam? If you are a gamer, you are probably already familiar with Steam. Steam is a service through which you buy games and install them on your computers.

They have hundreds of games available for purchase but not all of them can be run on Linux. Wine is a good solution for running Windows apps on Linux, but it does not work with each and every game perfectly. This is due to the fact that the Windows operating system is huge with so much communication happening between the games and the operating system and Wine is still under development and the developers’ focus is on porting applications, not games. Hence Wine doesn’t support some of the translations needed to run games yet.

In order to get around this problem, Steam decided to make Wine better so that it can support Windows Games. So they started a project called Proton which basically takes the already available opensource code of Wine and improves it so that they can support playing Windows games on Linux systems thereby increasing their customer base on Linux and as a result their sales too!

Proton also put back the improvements they made on Wine back to the Wine project so that users of Wine can also benefit from these improvements!

So why don’t we take the latest version of Wine with all the improvement added by proton? Doesn’t it make sense to use just Wine instead of Proton?

Making Wine better is just one part of what proton does. Each game needs its own unique settings in Wine to make them run properly and configuring these settings properly can be a difficult task for beginners to undertake. Even for the experts this can be a time-consuming task. Proton thus takes on this other duty of auto-configuring Wine settings so that a given game can run perfectly!

When to use Proton instead of Wine?

The simple answer is if you are running a Steam game that is Windows compatible and not designed to run on Linux, then close your eyes and go for Proton! You can do so by just clicking a checkbox to use proton on your Steam app for a given game!

When to use Wine instead of Proton?

Below are the 3 situations where you are going to want to use Wine instead of Proton.

Keep in mind that configuring Wine becomes your duty while you are doing any of the above-mentioned tasks!

Also, it is worth mentioning that the first 2 of the above activities can sometimes be accomplished using a software named Lutris without the need for going through the process of configuring Wine yourself! To learn more about Lutris I suggest you read the article below.

To summarise let’s have a look at the same table we looked at in the short answer section!