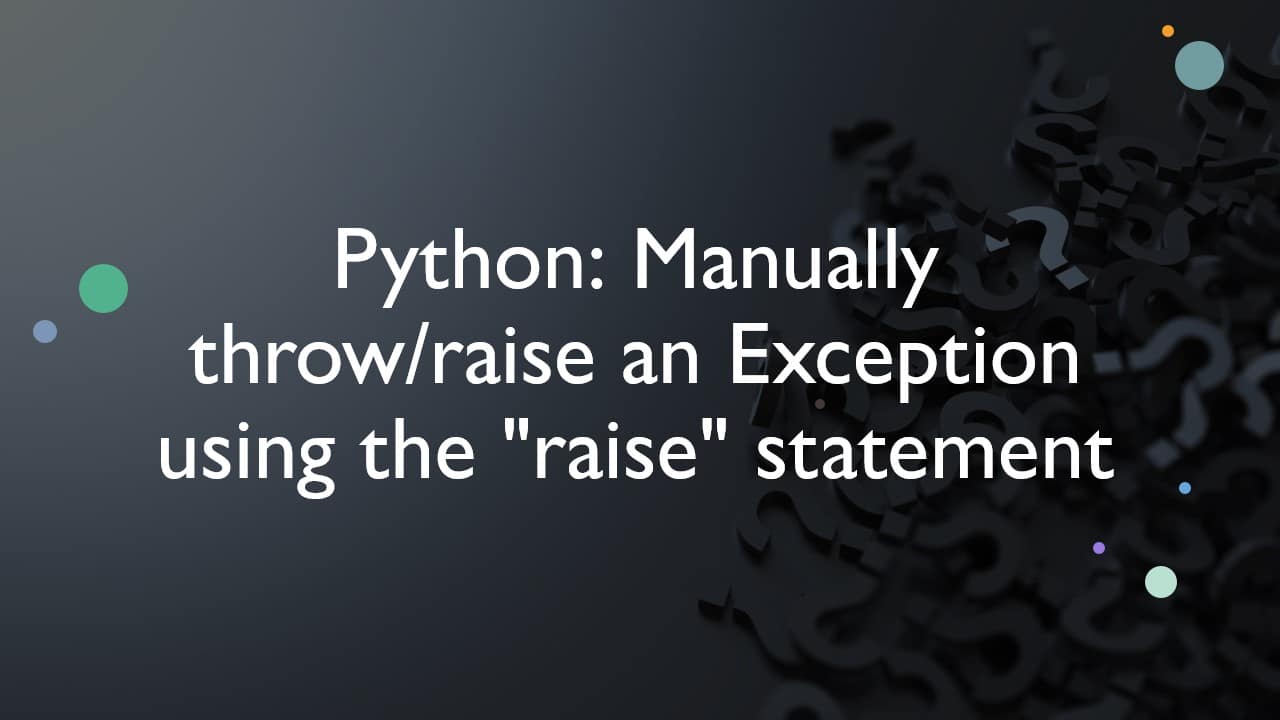 In this article let us learn how to manually throw an exception in Python.

How to throw/raise an Exception in Python

An Exception can be manually thrown/raised using the raise statement in Python.

Let us start with a simple example.

Running that code will result in an output like below

As you can see, we have managed to throw an exception using the raise statement! This has caused the interpreter to crash the program just like a runtime error would!

Hence the statement we are looking for here is raise. But this is just the short version of the answer. Read on to find out how exactly to employ this raise statement in your code in a variety of situations.

The rest of the article explains

The syntax shown in the example below (line 3) is the most common syntax you will see with the raise statement.

In the example above, we are throwing a ValueError with the error message “The value is not as expected”.

For those of you who are very new to Python let us briefly see what ValueError is. According to the official python documentation

which basically means the passed in argument is of the right type, but the value contained is meaningless to our program.

Running the code in Example-2 above will give you an output like this.

As you can see, the custom message we coded in is printed along with the exception name.

The syntax used in Example-2 is shown below. Replace the terms with the angle brackets ‘<>’ with whatever your program needs!

Use this syntax when you wish to raise an Exception and pass a custom error message through that Exception. This custom message can either be sent to an output device to be seen by the user or to a log file, so that you, the programmer, can see these logs later and use the information there for debugging purposes.

In case you wish to catch the raised Exception from the calling code so that you can deal with that instead of ending your program, you can do so as shown in the example below

The syntax used in the above example is shown below. Replace the terms with the angle brackets ‘<>’ with whatever your program needs!

If you ever need to use this syntax in your Python code, remember these 2 points

See how ValueError suits this particular program. It is considered best practice to pick an appropriate Exception to raise, else you will end up hiding bugs leading to unreliable programs. We will see an example of such a situation after Syntax#2.

Sometime, you may not need to log or print out messages to the user. In those situations you can use the syntax shown in the example below

The output on the interpreter will look like this

As you can see, the output has just the Exception class name and no error message.

The syntax used in the above example is shown below. As with previous syntax snippets, replace the terms with the angle brackets ‘<>’ with whatever your program needs!

What happens behind the scenes when we use this syntax?

The raise statement will expect the first object passed in to be an Exception object. If we pass a Class name as the argument to raise, the python interpreter will convert the code behind the scenes to be

which is a call to the constructor of the ValueError class with no arguments.

Similarly, in Syntax#1, what we wrote was raise followed by a call to the constructor with a string argument which is an attribute meant to be used as the error message. This constructor then returns a Exception object, which is what the raise statement needs!

If you wish to learn more about how this string is used in the error message, read my other article on printing exceptions below

Python Exceptions: Getting and Handling Error Messages as strings.

The class which is passed with the raise statement must be a subclass of the BaseException class, which as the name implies is the base class for all the built-in Exception classes in Python.

You can find all the built-in exception classes that python provides in the python documentation here.

If you scroll down till the bottom of that page you can find the Exception Hierarchy tree as shown in the image below.

So just for fun, to see what happens, let us pass a list object to the raise statement!

Now that we have understood how to use Syntax#2, let us next see when to use this syntax!

When to use Syntax#2 raise statement

Best time to use Syntax#2 is when you can recover from an Exception through code-substitution or default-value substitution. If you haven’t already, I suggest reading my other article which covers the basics of exception handling in Python.

Exceptions in Python: Everything You Need To Know!

In the article given in the link above, the sub-section “Strategy#2″ in the section “3 ways to handle Exceptions” explains how to recover from exceptions.

Syntax#2 best goes with such problems where it is possible to recover from exceptions and continue with the program execution.

As with Syntax#1 try using an appropriate type of Exception here, also make sure the exception you raise is very specific else you may end-up hiding bugs leading to a unreliable program.

Let us see a simple example of such a situation.

raise: How to avoid Hiding Bugs

Consider the snippet below.

This function call can produce 2 types of exceptions.

The output below shows the 1st of the 2 types

Here we passed in the second argument as 0, and division by zero is not allowed in Math, and this resulted in ZeroDivisionError

Here we tried to divide a pizza into 6 pieces using our Math function and this resulted in TypeError!

Say for example, when we wrote the code we forgot about ValueError and we wrote code only to handle division by zeros as shown below.

Now running the code, to cut a pizza into 6 pieces results in something like this!

As you can see the ValueError exception bug is completely hidden due to our poor choice of Exception type.

Instead if you wrote your code like this using ZeroDivisionError

Then if you run the code with bad values, the interpreter will crash the program revealing the ValueError bug as shown below.

Hence always go for the Exception type which is specific and appropriate for your situation!

Next let us see the best-practices to follow when raising user-defined Exception types. Let us start by learning how to make user-defined exceptions.

How to make your own exception?

Just declare a class that inherits from the built-in Exception class. Then you can raise your exception using Syntax#1 as shown below

You can also use Syntax#2 as shown below

Let us next move onto the 3rd, final and even shorter syntax of using the raise statement.

raise Syntax#3: without any arguments

The third syntax is to just use the raise statement with no arguments as shown below.

Let us see an example to see how this can be used.

Running this code will give an output like this

Here in the function reRaiseException() a ValueError is raised (in Line3) with a custom message and caught by a except clause inside the function. In Line7 the caught exception is re-raised to the calling code.

The except clause in Line10 catches this exception and prints the custom error message passed first on Line3 inside the reRaiseException() function.

One point worth noting is that, if there was no except clause inside the reRaiseException() function, the exception would have been straightaway passed to the main code without the use of the line raise.

Try running the example code below to see what I mean

The output of the above code is

If there was no except clause to catch this one level up, then this exception will crash the program, same as Example 1 in the beginning of the article.

The main reason for the existence of this syntax is because, there are situations, where you might want to do something in the except block inside the reRaiseException() function but you wish to let the the calling code to actually handle that Exception.

In our case we merely printed out 2 more lines before reraising the exception to the main code to demonstrate this point. We will see examples of some situations where this might be useful later in this article.

If no exception is present in the current scope the interpreter will raise a RuntimeError exception indicating that this is an error. This can be easily demonstrated by typing raise and hitting the enter button on the python console.

No active exception to reraise

And that ends our 3rd and final syntax/variants of using the raise statement.

Before ending this article, I would like to point out there there are one more syntax that employ the raise statement. A very common use-case involves Exception Chaining.

This comes in 2 sub-variants as shown below.

This is an advanced topic which needs a separate article to explain. Exception Chaining is typically used in big projects with several layers of abstractions, each layer having a set of user-defined Exceptions.

First try and master the above 3 syntax, as those will be used more that 9 out of 10 times you will ever need to use the raise statement.

And with that I will end this article.

Hope you have enjoyed reading this article and got some value from it.

Feel free to share this article with your friends and colleagues.

Be sure to checkout my other article on Exceptions

Exceptions in Python: Everything You Need To Know!

which covers all the basics of exceptions and strategies to handle them!