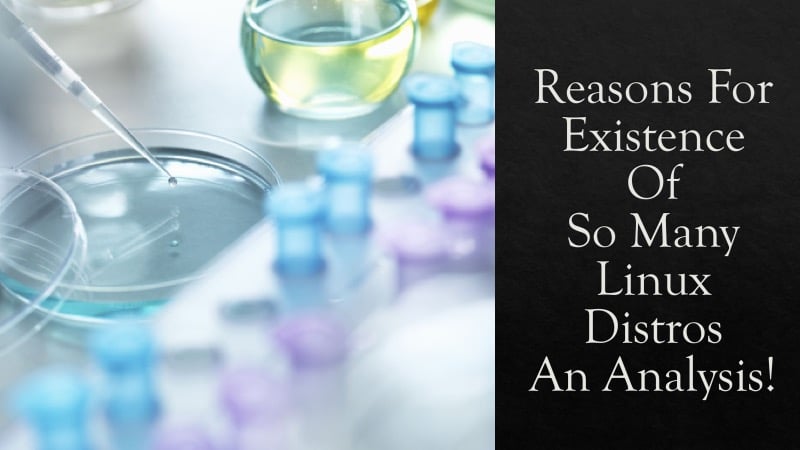 If you look at the desktop market, the majority of it is occupied by Windows, Mac OSX comes second and Linux takes the 3rd place. But if you look into it, you will realize that there is no such thing as Linux OS, but there are distributions based on the Linux kernel and there are literally thousands of these available for us to download and try!

What is the reason behind the existence of these many Linux distributions?

Won’t a general one be enough?

This article is all about answering these above questions. I have written this article keeping beginners to Linux in mind so that you can better understand the spirit behind Linux and the reason behind these many Linux distros more clearly!

The Age of Distributions

The word Distro is short for Distribution, which was one of the first problems faced by the GNU/Linux operating system.

As a large majority of people who wanted to use this Free software (Free as in Freedom and not Free lunch!) were newbies, the software was prebuilt to compile on the famous processor architectures and was distributed as images so that the end-user can skip the hard steps of the compilation of source code and building the OS themselves.

They also made sure that the source code was available for download online so that the user’s freedoms are preserved.

Since the source code is open for everyone to see, large communities started evolving to bring together Operating Systems suited towards more specific needs/goals.

Say a community of people just wanted to browse the internet with their computers, then there is no point giving them the software to write programs in. Thus since every community’s needs and goals were different these communities started distributing built images of this operating system with all the essential tools installed.

Thus the age of Distros began!

The goals we saw above is not the only differentiating factor between distributions. Let’s go ahead and see some of the other factors at play in the next section.

Some of the factors that differentiate these distros include the following

The above list is not a comprehensive one. To keep it brief I have just mentioned the important factors. But as we know people’s needs/goals can be different due to numerous factors and that’s the reason behind the existence of so many Linux Distros.

If you haven’t already, you can go ahead to distrowatch.org to see a complete list of Linux distros, both active and deprecated.

If you are interested in learning more about Linux, be sure to check out our step by step plan to master Linux here.

9 thoughts on “Reasons Behind The Existence of SO MANY Linux Distros: An Analysis!”