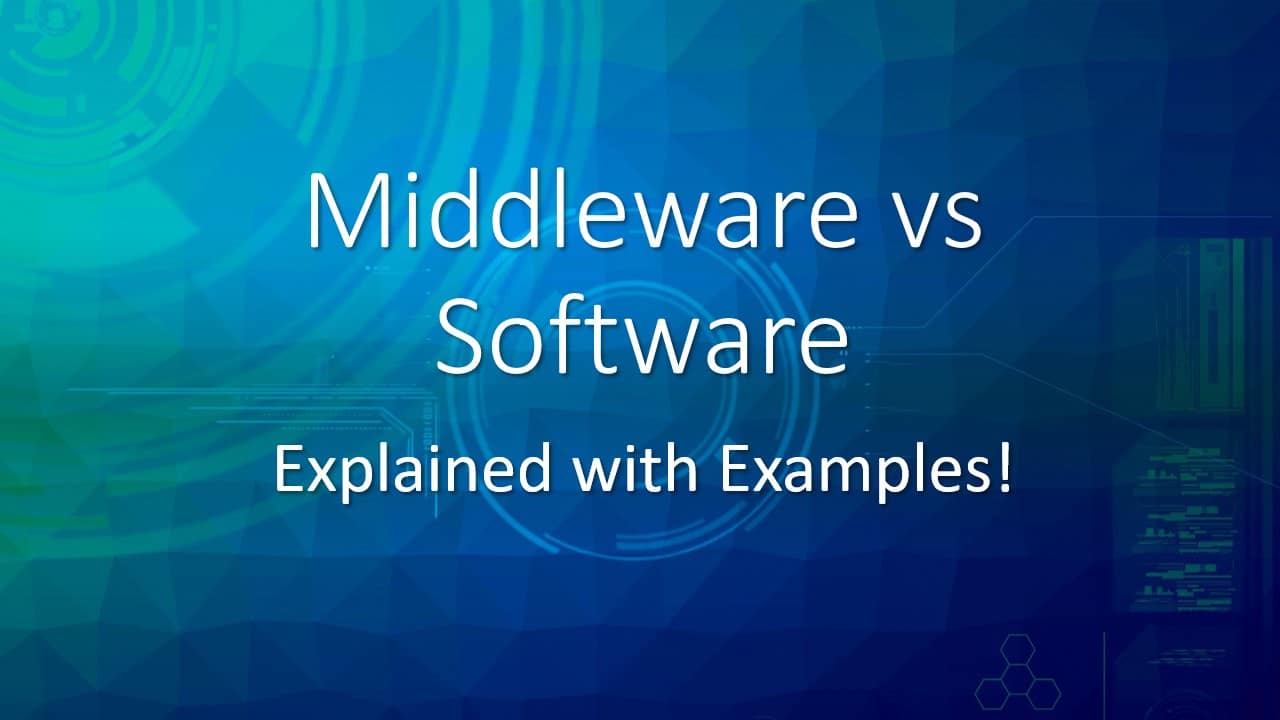 In this article, let us learn what the term “Middleware” means and see how that differs from the terms “Software”. Let us also see how these 2 types of code fits in the spectrum of “Computing” with the help of a few examples!

I have written this article keeping beginners in mind, hence I have tried not to use too much “Technical Jargon” in this article. So, let us begin!

For those of you in a hurry, here is the short version of the answer!

Middleware technically is a sub-class of software. Other than the fact that middleware is a computer program, middleware has major differences from his other software brothers. The table below shows the main differences between middleware and other types of Software

So let’s continue with more informative version of the answer!

Middleware is software that provides common services and capabilities to applications outside of what’s offered by the operating system. Data management, application services, messaging, authentication, and API management are all commonly handled by middleware.

The job of middleware is to combine the 2 programs and make a bigger one. This one is a bit tricky as the 2 “wares” that the middleware connects can be anything as mentioned in the above paragraph.

According to Microsoft middleware acts as plumbing between software to make them interchange data.

Middleware are everywhere, they are a very broad class of software, let us have a look at some examples of how middleware is employed in the world of software.

Most common example of a middleware that you might have already seen while browsing around in the internet are REST APIs. If you see a website that shows their store location using a small windows with google maps inside, they are using the REST API from Google.

REST stands for REpresentational State Transfer, while the name might sound overly complicated and too technical, the duty of REST is fairly simple. REST acts as a middleware between a server and a web application. In simpler words the Google REST API acts as a middleman between a given website and the Google server and helps them communicate with each other. Other famous implementations of REST APIs include Facebook, Instagram, Twitter etc.

Let us see another example of Middleware, this time in the area of “Distributed systems“. Consider the hundreds of individual weather stations located all over the world. These sensors might be from different manufacturers giving output in different formats like Celcius, Fahrenheit, etc. The program get the data from all these different sensors and and gives this combined data to the software that gives out the weather predictions is an example of middleware!

This is because, the applications usually involves system calls which are specific to a given operating system. But using a middleware you can translate the system calls and make a given application run on several operating systems. For Example, Cygwin and MinGW are 2 middleware which simulate a UNIX like environment inside Windows and helps us port UNIX software to Windows. You can read more about them here

The reason behind the name “Middleware”

This is simply the fact that “middleware” sits between 2 other “wares” as we saw in the 2 examples above.

The Other Types of software

Let’s start with the software that you are all familiar with i.e Operating Systems.

What is an operating system? An operating system is a program that abstracts the underlying software with the aim of improving the efficiency and ease of use both for the end-users and application programmers.

An OS does its job by abstracting the memory, processing power and I/O such that multiple processes can run simultaneously by sharing the available hardware resources without the knowledge of each others’ existence.

An interface is nothing but a group of functions. All operating systems talk to hardware via some predefined software interfaces.

For example, I could design an operating system that hands Wireless cards with 4 predefined functions/interface as below

Every Wireless card manufacturer who wants to make his device work on my operating system must provide a driver software which has these 4 functions. My operating system can then happily call these functions whenever the end-user needs something to be done. This is just a simple example of how drivers are implemented. I hope you got the point.

These applications cannot talk to the hardware directly. Instead, it does it through the operating system and its system calls.

How Software Differ from Middleware

Now that we have seen what both the terms “Software” and “Middleware” mean, let us see have a look at the table from the beginning of the article again!

Hence to make it really short Middleware is a class of software, which acts as a translator between 2 software to help them communicate with each other.

I hope by now, you are clear with what these terms mean, how middleware differs from other types of software where each of these software-types is employed in the world of computing!

And with that I will stop this article!

Hope you enjoyed reading this article and learned something useful!

Feel free to share this article with your friends and colleagues!

Firmware vs Software: Explained with Examples!